The Most Common Thyroid Gland Diseases and Problems

The thyroid gland is a small, butterfly-shaped organ situated at the base of the neck. It releases certain hormones that regulate the metabolism of an individual. 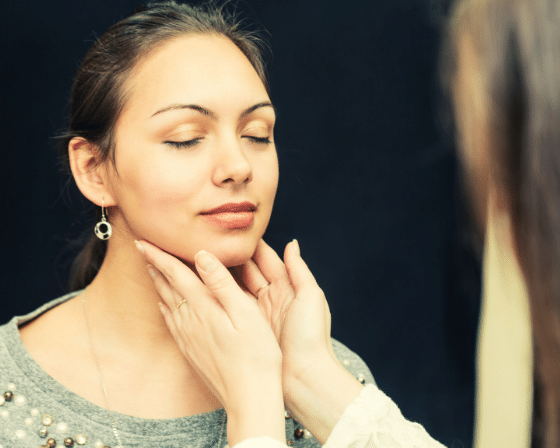 The thyroid gland is a small, butterfly-shaped organ situated at the base of the neck. It releases certain hormones that regulate the metabolism of an individual. The thyroid hormone controls many vital body activities such as breathing, body weight, heart rate, muscle strength, body temperature, menstrual cycles, cholesterol levels, etc. The thyroid gland is an essential element of the endocrine system. It produces stores and releases the thyroid hormones (T3 and T4) into the circulatory system to make them reach every cell of the body. Iodine, a component present in salt and many other food products is necessary for the normal functioning of the thyroid gland and the production of its hormones. The levels of T3 and T4 must not be either too high or too low. The hypothalamus and pituitary gland maintains the balance of T3 and T4 hormones in the body. There are many common thyroid diseases that are faced by the peoples here below is the list of those thyroid diseases and problems.

The malfunctioning thyroid gland affects the entire body. If too much thyroid hormone is produced, it may lead to a disease called hyperthyroidism. On the other hand, if too little thyroid is produced, it can cause hypothyroidism. Both of these conditions require medical intervention.

Hypothyroidism: It is a condition in which the thyroid gland fails to produce enough thyroid hormone. In hypothyroidism, the functioning of the body slows down, including the metabolism.

It often takes several years to develop the symptoms of hypothyroidism. In the early stages, the person may feel sluggish, tired, and weak. The metabolism slows down gradually which results in developing other signs and symptoms such as feeling cold at normal temperature, muscle weakness, etc. For treating hypothyroidism, medicines are given to maintain the level of thyroid hormone in the body. These medicines contain synthetically manufactured hormones resembling the ones that the thyroid produces naturally. It is generally advised for the patients to take the hormone capsules throughout life.

Goiter: Goitre is defined as non-cancerous, non-toxic, and non-inflammatory enlargement of thyroid hormone. The most common cause of goiter is the deficiency of iodine in the diet. The symptoms are not observed if the goiter is mild. However, if it is severe, it may cause symptoms such as swelling in the neck region, coughing, difficulty in breathing or swallowing, voice hoarseness, etc. Supplementing small doses of iodine in the diet can help treat the goiter.

Thyroid nodules: The abnormal outgrowth of the thyroid gland is called the thyroid nodules. This results mainly because of iodine deficiency. The nodules are sometimes fluid-filled or can be solid. These nodules are mostly non-cancerous but in very few cases, they can become cancerous. Most thyroid nodules don't have any symptoms, however, when they become large enough, they may demonstrate symptoms like difficulty in breathing and swallowing, swollen neck, pain in the neck, etc. Most of the thyroid nodule does not require any treatment if they are non-cancerous. But, if the nodules are found to be cancerous then the doctors may recommend removal of the nodule through surgery or shrinking it via radiation therapy.

Hashimoto's disease: Hashimoto's disease is also known as chronic lymphocytic thyroiditis. It can occur at any age but is most commonly found in middle-aged women. Like Graves' disease, it is also an auto-immune disorder in which the body's immune system destroys the thyroid gland thereby hinders the production of the hormone. This disease can remain stable for many years without showing any symptoms. When it becomes severe, it may demonstrate symptoms of hypothyroidism such as depression, fatigue, thinning of hair, cold intolerance, puffy face, etc. Hormone-replication therapy is often used as a treatment for Hashimoto's disease which may also help in relieving the symptoms.

Thyroid Cancer: When the cancerous cells arise from the tissues of the thyroid gland then it is called Thyroid Cancer. Generally, the people suffering from thyroid cancer develop thyroid nodules at the early stage which does not have any specific symptom. But when the disease progress, the nodule can get bigger in size swelling, or formation of a lump in the neck region. The person may have difficulty in swallowing or even get a hoarse/husky voice. The first and foremost treatment for thyroid cancer is surgery to remove the entire thyroid gland or parts of it. The doctors may also advise using radioiodine therapy. This therapy is used to kill any cancerous cells that are in case left after surgery.

It is difficult to diagnose thyroid disease in many cases because the symptoms are not very prominent and can be linked to various other disease conditions, pregnancy, or the process of aging. However, certain tests can help diagnose thyroid disorders. These include thyroid function tests, physical examination, and imaging tests.

The risk of developing thyroid diseases can be prevented by cutting down alcohol consumption, quitting smoking, avoiding processed foods, and limiting the soy content in the diet. Selenium supplements are also found helpful in keeping the thyroid gland healthy.

Diabetes its Symptoms, Treatment and Prevention

Types of Diabetes, risk and symptoms

Top 6 ways to reduce the risk of Thyroid Disease

According to a recent study, Thyroid is prevalent in more than 20 million individuals in a country like the USA. A proportion of this remains undiagnosed and comes under the knowledge only when the disease reaches an intensive level.