How can I avoid getting the Flu (Influenza)

Flu is known for its ability to easily getting transferred from one person to another. The factor of risk involved concerning its transmission is significantly higher as compared to other common diseases. Here are few tips to avoid getting the flu. 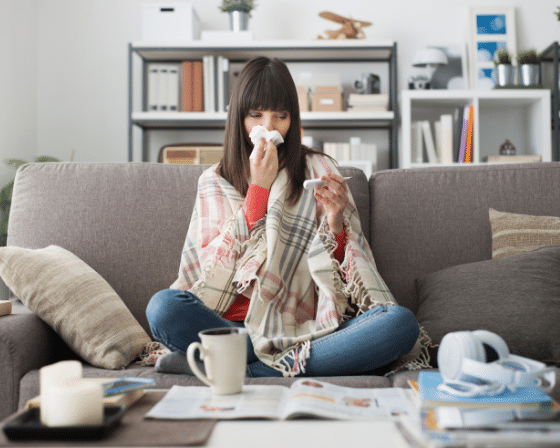 Following are some of the widely-known symptoms of influenza/flu:

When a person catches influenza, he/she is prone to get a fever. The temperature may vary from person to person and also depends on the intensity of influenza. Regularly check the temperature and take measures to keep it under control.

It is one of the most common flu symptoms, which indicates the possibility of influenza in the human body. In the case of the flu, the person experiences headaches and irritation. In most cases, a headache occurs during the initial days of influenza but is undoubtedly a well-known indicator.

Tiredness or aching muscles are common among people who are affected by influenza. However, tiredness is a widespread symptom of various diseases but can be greatly seen among flu patients.

If a person is experiencing uncontrollable coughing, sneezing, and a runny nose, then he/she may be affected by influenza, as these are some common symptoms. People with the flu widely experience dry cough.

These are some of the common symptoms of influenza or flu. Still, it is a matter of wonder that these symptoms are prevalent, and one may find it challenging to differentiate among different diseases based on these symptoms. Many people find such symptoms vague and get confused with these as they coincide with various other diseases/infections. But to differentiate appropriately, we must know that if these symptoms occur rapidly, there are high chances that he/she is affected by influenza. The degree of intensity is also higher in the case of influenza.

As we have significant information about the symptoms and reasons that cause influenza, we now have to emphasize how this spread can be contained. There are many ways people can look after themselves and include certain quality habits in their daily regime.

Ways to avoid getting the Flu

Here are some of the steps and acts that will help you to stay away from influenza to a very large extent:

8 Secrets to keep your Kidney Healthy

According to the latest survey, it is estimated that we lose almost 33.5 million lives to kidney disease every year. We must keep our Kidney Healthy, and here are few easy ways to keep our kidneys healthy and disease-free.

Symptoms of iodine deficiency | How to get enough sources of Iodine

Iodine is necessary for the overall development of the body. Iodine plays a role in metabolism and maintenance of the normal working of the body. Here are few symptoms of Iodine Deficiency and how to get enough Iodine in food.