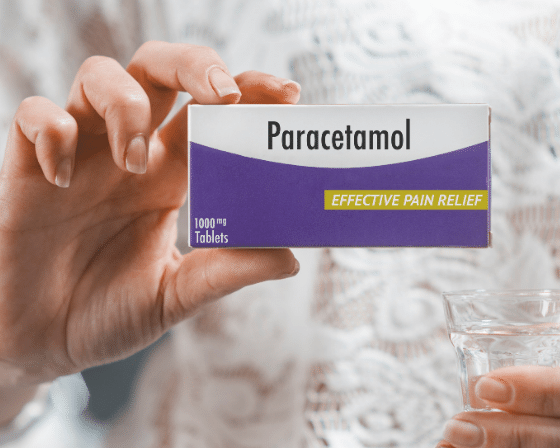 Paracetamol is a medicine widely used by the general public to treat mild to moderate fever and pain. It is also known as Acetaminophen. It is on the list of WHO's list of essential medicines. You can quickly get this medicine by the name of Panadol, Calpol, Tylenol, etc., in any medical store. Many drugs that are being used for treating cold and cough also contain paracetamol in combination. When combined with opioid pain medicines, it can also treat severe pain as in cancer or after surgery. Most commonly, it is available as an oral drug but can also be used through the rectum or injecting into a vein. It can be effective for two to four hours.

You can take paracetamol both on an empty stomach or with food. It is usually safe when taken at recommended doses. The maximum daily dose of this drug is 3-4 gm for adults. When taken in a higher amount, it can cause severe side effects and toxicity such as hepatic failure and skin rashes. Paracetamol is safe for pregnant and breastfeeding women. People suffering from liver ailments can use it but in a lower amount.

Paracetamol vs Other Similar Drugs

Paracetamol is not an antiplatelet drug; therefore, it does not hinder blood clotting, unlike aspirin. So, it can be used by individuals who have concerns with the coagulation of blood. Also, it does not cause gastric problems. Although in contrast with aspirin, it does not help in reducing inflammation and swelling. Compared with ibuprofen, it does not demonstrate adverse gastrointestinal effects such as abdominal pain, vomiting, and diarrhea. Paracetamol is generally considered safer than aspirin for children as it is not associated with the risk of Reye's syndrome.

Paracetamol has found many medicinal uses and helps in treating many conditions such as:

1. Fever: The most common use of paracetamol is to reduce fever in all age groups. The parents are advised to give paracetamol to their children only when the temperature is higher than 101.3 ºF. This medicine does not show any significant anti-inflammatory action.

2. General Pain: Mild to moderate cold and flu pain can be treated by paracetamol. It effectively treats general body pain, headaches, migraine, pain after childbirth in the pelvic region, pain arising due to kidney stones, etc., in adults.

3. Lower back pain: Paracetamol is considered the first line of treatment for pain in the lower back region.

4. Osteoarthritis: Paracetamol is one of the many treatment options for mild arthritis pain that doesn't get cured through exercise or weight loss. But it does not affect severe arthritis accompanied by redness, swelling, and inflammation of the joints.

5. Headaches: Paracetamol has the same effect as ibuprofen for treating headaches. Paracetamol, when used with caffeine, is found to cure migraine and stress headaches. It is also helpful in curing acute migraines.

7. Toothache: Paracetamol is usually prescribed for toothaches when NSAIDs are restricted due to gastrointestinal ulcers and hypersensitivity. It can also be given in a combination form with NSAIDS to control the dental pain swiftly.

3 Harmful Side Effects of Paracetamol

A regular dose of about 4000 mg per day does not show any adverse side effects in healthy adults. However, if paracetamol is taken in more than the prescribed amount, it can cause severe damage to the human body, such as:

1. Effect on the Liver: The metabolism of paracetamol occurs in the liver and is hepatotoxic. The acute overdose of paracetamol can severely damage the liver, sometimes proving to be fatal. The Food and Drug Administration (FDA) has instructed the manufacturers to warn the consumers about the potential risk of severe liver injury due to the ingestion of paracetamol by updating the warning signs on these medicines' labels. Overdose toxicity usually happens when paracetamol is combined with opioids. Also, the risk of liver damage by paracetamol increases when it is used with frequent alcohol consumption. Its high doses are also linked with upper gastrointestinal tract problems like ulcers and stomach bleeding. Some rare cases of kidney damage are also reported occurring as a result of paracetamol overdose.

2. Skin Reactions: Paracetamol can cause rare, severe, and possibly fatal skin reactions such as Toxic Epidermal Necrolysis (TEN) and Stevens-Johnson Syndrome (SJS). The main symptom of TEN is severe skin peeling and blistering, which quickly progresses to form large raw areas that may ooze or bleed. In contrast, SJS is usually a reaction to paracetamol that initiates with cold and flu symptoms followed by a painful skin rash that spreads and forms blisters. Then the top layer of affected skin dies and sheds off. It is strictly advised to the manufacturers to print a warning label about skin reactions that could occur through paracetamol ingestion.

3. Asthma: There has also been evidence for the usage of paracetamol and asthma attacks. Some medical experts recommend that the use of paracetamol should be restricted in children who have asthma or are at risk of getting asthma.

The excessive use of paracetamol can cause its poising/toxicity. In the first twenty-four hours of an overdose, it does not have any specific symptoms. Still, the person generally feels tired, has mild abdominal pain and nausea. This condition continues for a couple of days. The skin began to appear yellow, with blood clots, and the person becomes confused due to liver failure. Other complications include pancreatitis, low blood sugar, kidney failure, and lactic acidosis, leading to death after 4 to 18 days of toxicity. But with proper care and treatment, the affected person can fully recover from its toxicity in few weeks.

Signs and Symptoms of Paracetamol Poisoning

The signs and symptoms of paracetamol poisoning/toxicity occur in three-phase as discussed below:

Phase I: This phase starts within few hours of overdose and demonstrates symptoms like vomiting, nausea, pale yellow skin, more than usual sweating, etc. However, patients do not show any specific sign in the first twenty-four hours of toxicity. In some rare cases of extreme overdose, symptoms like metabolic acidosis and coma may occur in the first few hours.

Phase II: This phase starts after twenty-four to seventy-two hours of poisoning. It consists of signs of progressive liver damage. Generally, the hepatic cells start getting damaged as the metabolism of paracetamol initiates in the liver. The person may feel pain in the upper right quadrant region of the abdomen. Due to increased liver damage, liver function's biochemical markers also get disturbed and rise to an abnormal level. In this phase, Acute Kidney Failure can also occur due to multiple organ dysfunction syndrome or hepatorenal syndrome.

Phase III: The third and last phase occurs after three to five days of toxicity. It is marked by colossal liver necrosis resulting in complete liver failure with many other complications such as blood coagulation problems, decreased blood sugar level, hepatic encephalopathy, kidney failure, sepsis, brain inflammation, multiple organ failure, and finally, death. If the affected person survives the third phase, the liver and kidney functions may return to normal within few weeks.

Paracetamol is recommended as the first treatment for general fever and pain during pregnancy. It is not associated with any fetal abnormality. However, the use of paracetamol by pregnant women is linked with an increased risk of childhood asthma.

Some studies have reported a connection between the use of paracetamol and a minor increase in the risk of developing kidney cancer, but no effect on the chance of getting cancer of the bladder.

In light of the above discussion, we can say that paracetamol is an effective and widely used pain reliever with a low risk of side effects when taken in the prescribed amount. It can be ingested without regard to food. You should not exceed the recommended dosage as it can put you at risk of severe liver poisoning. Adults and teenagers weighing at least 50 kg should not take more than 1000 mg of paracetamol in one dose. Children younger than 12 years should only take the dose prescribed for them on the label. Alcohol should be avoided while taking paracetamol. If you experience any side effects after ingesting paracetamol, you should immediately contact the medical experts.

Diet, Exercise, Stress management and right amount of sleep can do wonders in reducing belly fat and all these are based on science.

How to Lower Blood Pressure Instantly in an Emergency?

Elevated blood pressure, also called hypertension, is a chronic condition in which the blood pressure against the arterial walls is continuously high. The normal blood pressure of a healthy adult is 120/80 mm Hg.

How to manage Hypoglycemia with Medicine

Understand how managing hypoglycemic medication can help you lead a normal life. Hypoglycemia is the condition when blood sugar is depleted and falls to dangerously low levels such that it impairs your daily routine.