Have you developed any pimples on your skin all of a sudden with symptoms similar to smallpox, then immediately consult your doctor. Because it may be Monkeypox. 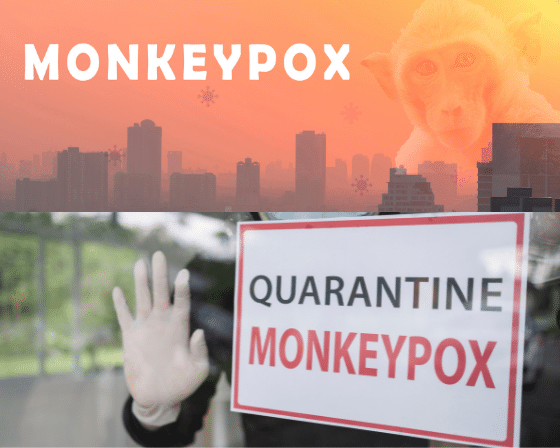 Monkeypox in the UK

The latest report shows that 2,208 cases are reported in the UK and 2,115 in England as of 21 July 2022. UK Health Security Agency (UKHSA) has acquired more than 100,000 extra doses as the cases increase from 2000 to 2,137 on 19 July 2022. The majority of monkeypox in the UK is seen in gay, bisexual, and men who have sex with men. However, there is no scientific evidence to relate this information. The states of the UK have a monkeypox disease, as per the reports one or more cases of monkey virus in Texas.

As of 24 July 2022, Singapore reached a total of eight cases, with four local and four imported cases. But none of the cases are interrelated. The first case of monkeypox, Singapore was reported on July 21 in an Estonian man who returned from London and tested positive for monkeypox symptoms of fever, rash, and swollen lymph nodes. Another Singaporean man is found with monkeypox virus infection in the groin and other parts.

India has reported its fourth case of monkey disease on 26 July 2022 in a man in Delhi who has no foreign travel history. The first three cases are reported in kerala who travelled back from the Gulf region. Also the first case from the south east Asia region is from India. Recently the World Health Organization has declared monkeypox virus as a public health emergency of international concern (PHEIC), an highest level of alarm.

What is monkeypox virus?

Monkeypox virus is not a deadly disease as many people have recovered without any problem except large scars.Monkeypox virus can cause a few complications such as secondary infections,pneumonia, sepsis,encephalitis, eye infection, or loss of vision.

The most common monkeypox symptoms include fever, swollen lymph nodes, a rash that forms blisters, muscle pains, and swollen glands with many lesions at a particular place or all over the body. The exposure to monkeypox symptoms ranges from 5 to 21 days and the duration may last for 2 to 4 weeks. Monkey disease can affect anyone but is more in children, pregnant women, or people with less immunity.

The monkeypox infection is divided into 2 stages: the invasion period, and the eruption period.

Inversive period of monkeypox virus ranges between 0 to 5 days from the onset of viral infection. The monkeypox symptoms in the invasion period are fever, intense headache, lymphadenopathy (swollen lymph nodes), back pain, myalgia (muscle pain), and intense asthenia (lack of energy). The characteristic feature of this period is lymphadenopathy that may appear similar to other diseases such as chickenpox, smallpox, and measles.

The eruption period begins within 1 to 3 days of onset of fever. The rashes on the face and extremities appear to be more concentrated compared to the rashes on the trunk. The skin eruption affects the face palms of the hands and soles of the feet, oral mucous membranes, genitalia conjunctiva as well as cornea. The rashes in the eruption period go through different stages from macules (flat base lesions) to papules (slightly raised and firm lesions), vesicles (clear fluid-filled lesions), and pustules (yellowish fluid-filled lesions), and finally form a crust that will dry up and fall off.

How does monkeypox spread?

Monkeypox transmission can be airborne. A person with monkey disease can spread the virus from the onset of monkeypox symptoms till all the lesions have dried and fallen off, with trace evidence of spread for more than a week even after the lesions are crusted. A significant proportion of the monkeypox virus is seen in men who have sex with men, especially in Kannada Kama Spain, and the UK.

Factors that include monkeypox transmission or eating raw or inadequately cooked meat, and infected animal products. People who live near or in forest areas will have indirect or a low level of exposure to the infected animals. Monkeypox transmission can also occur from the mother to the fetus through the placenta or during childbirth due to close contact. But there is no scientific evidence for all of these.

Monkeypox treatment has not yet been discovered. But can be prevented through vaccination of smallpox that contains vaccinia. In 1980, in Africa, the smallpox vaccine was tested and calculated as a post-exposure prophylaxis method for people in close contact with an infected individual.

With the present outbreak, many countries have started buying monkeypox vaccines and releasing them for use. Also, the use of antivirals for smallpox is recommended against the monkeypox virus as they are close strains. Some of the antivirals are tecovirimat, brincidofovir, cidofovir, acyclovir, etc. This may help in monkeypox treatment to some extent in people with severe illness.

Smallpox vaccines such as Imvanex/Jynneos will provide about 85% of protection against monkey disease. However, there is no scientific evidence to prove the same. According to the Centers for Disease Control and Prevention (CDC), two subcutaneous vaccinations of Imvanex or Jynneos are administered four weeks apart.

Based on the availability, monkeypox diagnosis is done by cell culture, polymerase chain reaction (PCR), immunohistochemistry, and electron microscopy. Monkeypox image of an infected person is full of lesions and swollen lymph nodes.

For monkeypox, prevention is necessary to raise awareness of risk factors and by educating people about the prevention strategies. Many scientific studies are underway to assess the feasibility and appropriateness of vaccination and antivirals for the prevention and control of the monkeypox virus.

Reduce the risk of zoonotic transmission

Difference between smallpox and monkeypox

1. Am I at risk of getting monkeypox?

2. When should someone get tested for monkeypox?

Ans. If you think you or someone close to you are in danger of the monkeypox virus visit a healthcare provider.

3. What should I do if I have monkeypox symptoms?

Ans. Avoid close contact with others, pets, and animals. Quarantine yourself, wait for the results to be negative and lesions dry and fall off.

4. Can I get monkeypox from having sex?

5. Should people be concerned about going to crowded events?

Ans. You will get monkeypox if you have close contact with someone infected. Avoid events involving people in activities that require close contact.

6. Is there a vaccine to prevent monkeypox?

Ans. Vaccines of smallpox like Jynneos, and Imvanex can be used to prevent the monkeypox virus as both are related strains.

7. Should everyone who is sexually active get vaccinated?

Ans. No. But if you had sex with an infected person or someone close to you is infected and you came in contact with that person. Then you are recommended to get vaccinated.

Ans. Monkeypox is occasionally dangerous with a low number of deaths but may result in complications like pneumonia.

Sweaty palms can make you nervous and build anxiety due to heavy sweating and body odor. You can get rid of excess sweat with the most effective treatments.

Leucoderma or vitiligo is the white skin disease name that occurs due to loss of pigment in skin. With no cure, the leucoderma treatment will help to reduce progression.

Skin tags are noncancerous and do not cause any harm, pain, or discomfort. However, these are some of the surest reasons to look unattractive. And here comes the need for skin tag removal. Below are some of the effective ways to remove skin tags.

Cracked heels refer to a situation in which there is an occurrence of crack/fissure in the skin of the heel which is abnormally hard and dry. These mainly occur in the cracked ankle skin or cracked soles of feet