Stomach Ulcer Diet and what to eat

Various factors or irritants such as aspirin, alcohol, certain drugs, etc., can contact the mucosal lining and degenerate it, and cause stomach ulcers. This article will help you to understand stomach ulcers and how to manage them with a balanced diet. 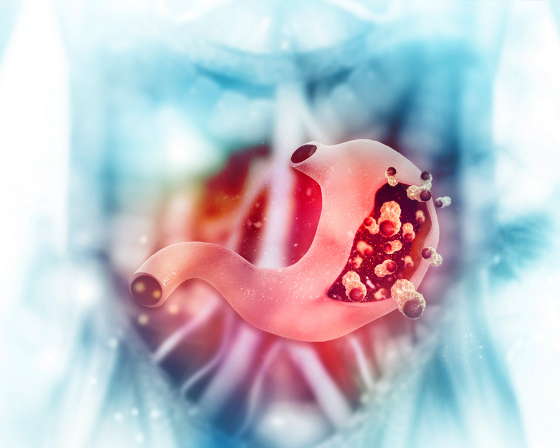 How are ulcers formed?

Sometimes, the balance between stomach acid production and its resistivity created by the stomach's mucous layer gets disturbed. As a result of the excessive acid production, or weakening of the integrity of the mucosal lining (protective sheet) or both, the mucosal lining is broken, and the underlying layers of the stomach are exposed to the effect of the concentrated acid resulting in stomach ulcers. Various factors or irritants such as aspirin, alcohol, certain drugs, caffeine, bile acid, etc., can contact the mucosal lining and degenerate it. The infection of Helicobacter pylori bacteria can also form ulcers.

The treatment procedure should focus on relieving the symptoms, healing ulcers, and preventing complications like surgery. First of all, antibiotics against Helicobacter pylori should be given. Also, it is essential to neutralize the excess acid produced. For this, antacids are the earliest and most logical method for providing relief. Various other drugs that block the synthesis of acids and provide resistance to the stomach lining are also prescribed. Along with the medication, dietary guidelines should also be followed strictly.

1. Whenever a patient is on a bland diet or regular diet, he needs to know which foods are needed for a nutritionally adequate diet and the importance of including these daily.

2. He/she should select from a wide variety of foods, omitting those foods known to be distressing to the patient.

3. The moderate use of seasonings is permitted.

4. Regularity of mealtimes is essential. Small and frequent meals should be taken.

5. In between meals, protein-rich meals should be taken.

6. It is suggested to take a moderate amount of food. Heavy meals are avoided.

7. Having food outside the house will not cause any harm if good judgment is used in the selection of food.

8. Food must be consumed in a relaxed atmosphere, and the person should forget about the personal and family problems while having meals.

9. A short relaxation time before and after meals may be conducive to greater enjoyment of meals.

10. Food must be well-chewed and eaten slowly. 'How' the food eaten is more important than 'what' is eaten because fast-eating provokes gastric feeding reflux.

Smoking and drinking alcohol should be avoided, particularly on an empty stomach. Both of these can cause incompetence and reflux of intestinal juice into the stomach. They also interfere with the gastric acid and secretion of protein-digesting enzymes.

Good physical and mental health is fundamental if the person learns to constructively cope with his/her problems. Mental and physical rest is an important modification of living and work habits is needed when overworking and physical stress cause exacerbations of the disease. The patient should remember that anxiety and worry can upset digestion.

Foods to be Included

Foods to be Avoided

Modification of the Diet in Bleeding Ulcers

Primary treatment of gastric ulcer is by giving antibiotics against Helicobacter pylori bacteria. A liberal diet suitable for the patient is suggested. Nowadays, very rarely are surgeries done for gastric ulcers. Just taking care of the diet and reducing the infection is more than enough for treating ulcers.

11 Tips to Improve your Digestion Naturally

It is now well known that imbalances in gut bacteria have a direct link to irritable bowel disorders and irritable bowel syndromes (IBS), like Crohn's disease and ulcerative colitis. Here are 11 proven ways to enhance your digestive system naturally

The gastrointestinal tract (GIT) acts as a doorway for all the nutrients and various other substances. All the disruptions associated with the intake of food, disorders affecting the GIT, and its accessory organs influence your overall health

In every one in ten people have a kind of stomach ulcer. In most cases, ulcers are curable, making them look nothing more than a trivial health issue to the general population. Here is a brief about stomach ulcers, their causes, symptoms, and treatments.