The Dark Side of the Rapeseed oil (Canola)

Canola is the second-largest oil-producing crop and considered healthy and safe. However, studies have concluded some downsides and adverse effects of using and consuming Canola oil. Here are some demerits of using Canola oil. 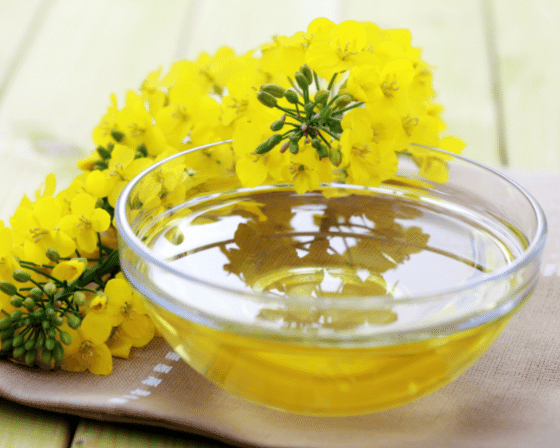 Rapeseed is a summer plant famous for its beautiful golden-yellow flowers and its uses. It is now well-known with the name Canola oil. The FDA banned rapeseed oil in 1956 because of the high amount of erucic acid (about 30% - 60%). After it was banned, many scientists experimented and tried to create a new variety of Rapeseed with a low amount of erucic acid. Finally, in 1974, they succeeded and named the new variety LEAR (Low Erucic Acid Rapeseed) Canola.

As all good things have some drawbacks, we know that Canola oil is beneficial for us, but it can also be harmful to us as it has a high Omega-6. Omega-6 is also an essential fat for our body, just like the omega-three fats. Nowadays, modern diets tend to be extremely high in Omega 6 while low in Omega-3. The essential ratio of Omega-6 and Omega-3 required by our body is 1:1, respectively. But the western foods that we eat today don't fulfill the required ratio; they are estimated at around 15:1, which is an imbalanced ratio. The intake of an imbalanced ratio of Omega 6 and Omega 3 can be the reason for severe and chronic health problems like Alzheimer's disease, obesity, and many other heart diseases.

Canola plants are genetically modified to extract edible oil from them. Due to this, they become more resistant to herbicides and pesticides. Although many scientists have proved that genetically modified food items are safe for our health, some health experts suggest avoiding the consumption of genetically modified foods as they are the reason for some potential health problems such as allergies, toxicity, and organ damage. Not only to the consuming organisms but also affects our ecosystem. Genetically modified plants have distinguishing characteristics from wild species or natural ones. These plants are developed with the required features. Therefore, people prefer to plant the modified one instead of the natural plant. They can create imbalance or change in the food web.

We all know that trans fats are harmful to our health. But it is hard to separate trans fats from some food items, so many companies try to conceal the presence of trans fats in their products. The WHO (World Health Organization) recommends that the maximum amount of trans fat in our food items should be less than 1% in our daily calorie intake. The intake of trans fats can cause numerous health issues and problems like a decrease in HDL (High-Density Lipoprotein) which are considered suitable for health. They also increase inflammation and lower insulin sensitivity which makes our body less resistant to many other diseases.

As Canola oil is naturally extracted from genetically modified Rapeseed plants, they lack oxidative stability and become rancid when left untreated or without adding preservatives. Therefore, the manufacturing companies have been using synthetic antioxidants as a preservative. The antioxidants are used for preserving the freshness of the food item by protecting it from the outer atmosphere. It is used in many food items to maintain their crunchiness and prevent them from getting soft; they include packed chips, cookies, cereals, and pulses. If the Canola oil you use daily as your cooking oil has expired before the intended date, it simply means that it has been treated, processed, and antioxidants are added. However, they are widely used for preserving the freshness of food items; they can cause certain diseases and disorders such as tumors, liver enlargement, neurotoxicity, and paralysis.

In a survey report for obese or overweight people, it was found that the people having chronic ailments such as hypertension, high cholesterol, high blood sugar, excess belly fats, etc., were mostly those who use Canola oil regularly as their cooking oil. But the people using regular oils as their cooking oil were rarely affected by these problems. Refined Canola oil increases cholesterol in your body. All these minor changes and health problems can spike the risk of heart diseases in your body, which can be fatal.

Do you know how edible Canola oil is processed? Canola oil is a chemically refined oil. It undergoes different stages in the process like refining, bleaching, and deodorization. Although these processes are essential for preserving them safely, they decrease the nutrients present in the oil, such as some fatty acids essential for our body, vitamins, and antioxidants.

Many researchers have performed different experiments with Canola oil on animals, which concluded some severe problems. The regular use of Canola oil can decrease the antioxidant present in our body and, at the same, increases the LDL (Low-density lipoprotein) cholesterol, which is harmful to our body. It also increases our blood pressure which subsequently decreases our fitness and lifespan. Some studies reported that the compounds formed during the heating of the Canola oil could increase inflammatory markers.

The interior lining of our blood Vessel, called the endothelium, is negatively affected by the use of Canola Oil. According to the researchers, the regular use of the oil can cause dysfunctional endothelial. Some experiments have shown that when the oil mixed with salt is consumed, it can trouble your blood vessels to contract properly, called endothelial dysfunction.

Hypertension is the situation of high blood pressure for a long time. According to researchers, the regular consumption of canola oil can spike up your blood pressure for more than 13 weeks. Hypertension is a severe problem that most adults are having due to improper and unbalanced diets. It can affect both the physical and mental health of a person. Sometimes it can also lead to death.

Scientists and other food researchers have performed many experiments consequently. One of those experiments was to know the effects of Canola oil on the brain. In this experiment, some animals were fed foods with Canola oil while others were fed without the oil. After a few days, it was observed that the animals having a diet with the oil had harmed memory, and an increase in the body weight was also observed, while the other animals were found normal. It proves that the use of Canola oil for an extended period can also affect your brain and other organs.

You have read some adverse facts about using Canola oil as your culinary oil. You might have confusion or some doubts about it as it contradicts the facts you read or heard before. Many companies are owned by the Canola oil manufacturing companies, which exaggerate some of its good features. But, it's your responsibility to keep yourself healthy and fit, so you should know the benefits and side effects of all the things that you consume in your daily life.

Benefits of Giloy for Health, Immunity and Skin

Giloy is used for many health benefits, and it has been around for hundreds of years. Here is a brief about the benefits of Giloy on health, Skin, and Immunity.

Tulsi also known as Holy Basil, is a herb widely found in Southeast Asian subcontinents. It is widely cultivated in India because of its medicinal properties and religious significance. Here are 11 Amazing Health benefits of Tulsi

Sabja seeds, also known as Basil seeds is an Asian Super Food and has numerous health benefits. It also has long History of use in Ayurveda and Chinese Medicines.