Azithromycin: Uses and Side Effects

A common antibiotic used to treat a wide range of bacterial diseases, including respiratory infections, ear infections, skin infections, eye infections, etc. Here are the uses and side effects of Azithromycin. 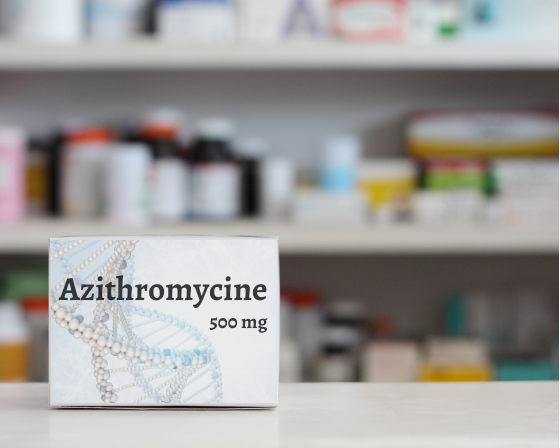 Azithromycin is employed to treat certain bacterial infections occurring at different body parts. It belongs to the class of antibiotics called macrolides. It works by suppressing the growth of bacteria or killing them. However, this medicine will not work for the general cold and flu.

This medicine is available only with the doctor's prescription. It is available in the following dosage forms:

Azithromycin is used to treat diverse infections of the sinuses, lungs, skin, and other body parts. Some of them are:

Azithromycin in Pregnancy and Breastfeeding

Azithromycin does not harm pregnant women. Although, no adequate well-controlled studies are reported in pregnant women. The safety of this medicine during breastfeeding is not fully known. As reported, only low levels of Azithromycin are found in breast milk, and the medicine has also been used in children, so it is unlikely that the infants feeding on breast milk would suffer from any side effects. However, it should be kept in mind to use the drug with caution during breastfeeding.

Not many studies have been done on the relationship of age to the effects of Azithromycin to treat sinusitis or pneumonia in children younger than six months old. The safety and effectiveness of this drug have not yet been established in this age group.

Appropriate studies are still needed to know the relationship between age and Azithromycin's effect to treat pharyngitis or tonsillitis in children younger than two years of age. Safety and efficacy are yet to be established.

Problems with aged people have not been appropriately described in various studies that could limit Azithromycin use in old-age people. However, these patients are more likely to have heart rhythm problems, requiring caution in patients receiving Azithromycin.

Azithromycin Interaction with other Drugs

Certain medications should never be used together. But in some cases, two different medicines may be prescribed together even if an interaction might occur. Your doctor may feel the need to change the dose or tell you about other precautions that are necessary in such cases. When you take this medicine, your healthcare professional must know if you are taking any of the medicines listed below. The following interactions have been selected based on the potential significance of these medicines and are not necessarily true in all the cases.

Using Azithromycin with any of the following medications is not recommended. Your doctor may decide not to prescribe you these drugs or change some of the other medicines you take. These are:

1. Before using Azithromycin, tell your doctor if you are allergic to it or other antibiotics (such as erythromycin, clarithromycin, telithromycin). It may contain inactive ingredients, which can cause allergic reactions and many other problems.

3. Azithromycin can have an adverse effect on the normal rhythm of the heart (called QT prolongation). Abnormal heart rhythm can sometimes cause severe effects such as fast/irregular heartbeat and various other symptoms like fainting, severe dizziness, etc., that need immediate medical attention.

4. There is an increased risk of abnormal heart rhythm if you are dealing with some specific medical conditions or are taking other medicines that also cause abnormal heart rhythm. Before using Azithromycin, tell your physician of all the medicines that you are taking or if you have any of the conditions such as certain heart problems (heart failure, slow heartbeat), family history of heart problems (sudden cardiac death).

5. Low levels of magnesium (Mg) or potassium (K) in the bloodstream may also increase the risk of abnormal heart rhythm. The chance of getting abnormal heart rhythm further increases if the patient uses certain drugs (such as diuretics) or if he/she is having certain conditions such as diarrhea, severe sweating, or vomiting. It is recommended to have a detailed talk with your doctor about using Azithromycin safely.

6. Azithromycin may cause live bacterial vaccines (such as typhoid vaccine) not to work properly. Do not go for any vaccinations/ immunizations while using this medication unless your doctor tells you to.

8. During the pregnancy period, this medication should be used only when needed. Openly discuss its risks and benefits with your doctor. This drug passes into breast milk. Consult your doctor before breastfeeding.

Azithromycin is undoubtedly a wonder drug used to treat various illnesses, but it must be consumed with all the precautions as it can result in various side effects. Remember to keep this medicine (and other medicines) out of the reach of children. Also, never share your medicines with others without consulting the doctor and use Azithromycin only as directed by the medical expert.