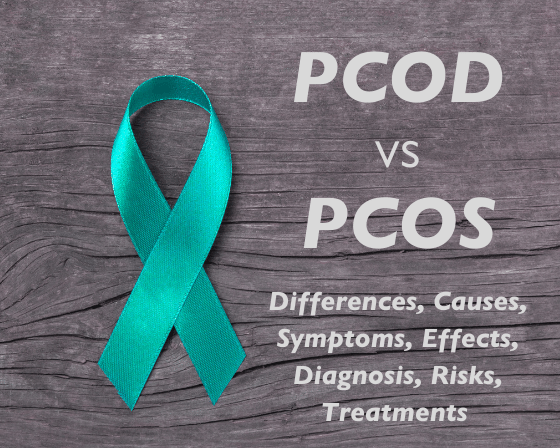 PolyCystic Ovarian Disease is a health issue of women in which the partially mature or non-mature eggs present in an ovary eventually form cysts. The primary cause of this condition is overweight or obesity, consumption of unhealthy and junk food, hormonal imbalance, and being stressed. As a result, the ovaries became larger than normal in size and started secreting androgen hormone in large amounts. Thus, it adversely affects a woman's life, her body as well as fertility. The menstruation cycle is normal in PCOD; however, sometimes, the females experience delayed periods. It is usually detected when a female is not able to conceive despite trying.

1. Obesity and Weight-Gain in the Abdominal region

3. Heavy Bleeding at the time of Periods

PolyCystic Ovarian Syndrome is a metabolic disorder in which a higher amount of androgen is produced in the ovaries. This results in the formulation of dozens of ovarian cysts (liquid-filled sacs) in a female's body every month. The cysts are often large and made up of non-developed eggs and various other ovarian secretions. Girls suffering from PCOS have difficulty with their menstruation cycle. They experience irregular or non-reliable periods, delayed menstruation, and even no periods at all. This condition is more severe than PCOD. The formation of cysts at such a high rate also results in the cessation of the release of the eggs from the ovaries, which causes anovulation. It is usually detected at an early age.

3. Amenorrhea (No Periods at all)

7. Excessive Hair on the Face

Effect of PCOD and PCOS

Ovarian cysts are formed in both cases. Apart from that, the male steroid hormone androgen is also produced in larger quantities. The secretion of androgen is such that it surpasses the production of the female hormone- estrogen. This, in turn, causes a lot of abnormalities in the overall body of a female.

6 Major Differences between PCOD and PCOS

1. Seriousness: PCOD is usually not treated as a disease because it can be cured with the proper exercise schedule and specific diet. At the same time, PCOS is a metabolic disorder that is a grave condition.

2. Prevalence: PCOD is more prevalent than PCOS. One-third of the women of the world have PCOD.

4. Visibility: The symptoms of PCOS are visible since the teenage years. Excessive body hairs, acne, and problems like weight gain are prominent from a young age only due to the disturbances in the overall metabolism.

5. Fertility: Women suffering from PCOD do not show considerable fertility complications. A little medical help is needed for them to conceive. On the other hand, those with PCOS deal with infertility and miscarriages.

6. Ovulation: Females with PCOD can ovulate normally over regular periods and can be pregnant without any problem. But the females suffering from PCOS cannot ovulate because of the disturbed hormonal secretion.

Causes of PCOD and PCOS

Diagnosis of PCOD and PCOS

1. Infertility: As the ovulation frequency is reduced in the body of females suffering from PCOD, it can cause infertility. In contrast, the female suffering from PCOS may not be able to reproduce even after changing the lifestyle pattern.

2. Diabetes: Both PCOS and PCOD result in insulin resistance which leads to diabetes.

3. Heart Disease: Both of these conditions cause hypertension which can lead to heart problems.

5. Effect on Mental Health: The disturbances in the secretion of hormones can cause mood swings, depression, anxiety, and behavioral changes in females. When the disease is diagnosed, then also women get depressed, disturbed, and deeply saddened.

7 Effective Treatments for PCOD and PCOS

PCOS cannot be treated and cured, and it even does not subside on its own. In many cases, PCOD has been treated completely, but there is always a chance of getting it back. The treatment procedures just include reducing the complications and treating the symptoms. Various options are available now. Depending upon the severity of the symptoms and the desire to get pregnant, a woman can choose one of the many options for her treatment.

3. Healthy Eating: Getting a proper well-balanced and PCOD/PCOS specific diet and regular exercise helps maintain hypertension and cholesterol. It also helps in treating sleeping disorders such as sleep apnea.

4. Say NO to Alcohol and Cigarettes: Cutting down the consumption of alcohol and quitting cigarettes and other tobacco products are effective for lowering down the levels of androgens.

5. Drugs and Medications: Doctors recommend a number of drugs and medications to treat diabetes and insulin resistance. Some drugs are also prescribed for encouraging the process of ovulation and the menstruation cycle to occur regularly. Retinoic acid and antibiotics are recommended for treating acne. Some doctors also prescribe oral contraceptive pills to help normalize the menstruation cycle. Certain hormonal medicines are also prescribed to check the level of androgen hormone. It must be noted that these medicines should always be taken by consulting a specialized doctor and not on our own.

7. Homeopathy: Treating PCOD/PCOS with homeopathy does not cure it completely. But it is an effective way to prevent further health complications. Homeopathic treatment is effective in regularizing ovulation, balancing the hormonal secretion, restoring the normal menstruation cycle, etc. Some homeopathy medicines also claim to dissolve the follicular cysts that eventually eliminate the need for all the other treatment procedures such as surgery or hormonal therapy.

It is challenging for a woman with PCOS/PCOD to conceive and deliver normally. Still, regular consultation with gynecologists can always be done to know the new technological advancements in this field. For PCOD, it is relatively easy if healthy lifestyles are followed. At last, both males and females should remember and make others realize that any disease is harmful to us, and we must talk about them. Consulting a good gynecologist for your problem is an entirely normal and necessary thing to do.

Best Ways to Balance Hormones and Boost your Fertility Naturally

The human body may sometimes cause hormonal imbalances to increase the risk of infertility in both males and females. Infertility can be treated both naturally and artificially with the help of a doctor or medical attention.

Ovulation Symptoms : 11 Signs of Ovulation- Know Your Most Fertile Days

Learn what is ovulation and when is the best time to get pregnant, and ovulation symptoms and signs to look out for

The diet of a pregnant woman must consist of the appropriate amount of nutrition. Apart from the actual consumption of proteins, fats, and carbohydrates, the diet must include essential vitamins & minerals like calcium, iron, folic acid, etc.